Trove Of Antique Portraits, Including 1 Of Susan B. Anthony, Found In Attic

“Oh my god, I think we found the Goonies’ treasure.”

That’s what David Whitcomb thought late last year when he discovered a seemingly secret attic of a building he had just bought in Geneva, NY. There he found centuries-old photos and equipment – and a secret.

Whitcomb, who had just bought the historic building to expand his law firm, recalls inviting a friend for a guided tour.

“While we were standing and talking on the third floor, which is empty, we looked at the ceiling and … the suspended ceiling is kind of falling apart and we poked around in one place.” Whitcomb Narrates Morning Edition. “We assumed we would see the roof.”

From the outside, said Whitcomb, the building appeared to have no attic. Nobody – neither the sellers nor the owners before them – had any idea there was, says Whitcomb. But there it was – a hidden room, sealed off by a dry stone wall and lost in time.

They stacked chairs so Whitcomb could stick his head through the hole in the ceiling. As he shone the light on his cell phone across the room, he said he saw piles and piles of “beautiful, gilded picture frames from the turn of the century”.

What he’d found was a hidden turn-of-the-century portrait studio: antique backdrops, equipment, glass negatives, and prints, mostly by locals – though not all of them were unknown. One was a portrait of a woman in profile holding a book. She looked familiar, like Susan B. Anthony, he says. When he googled it, it was the image that came up. The 43-year-old lawyer came across one of the most famous photos of the legendary suffragette a year before her death.

The framed portrait of Susan B. Anthony found by attorney David Whitcomb in a Geneva, NY (David Whitcomb) attic

“It’s in the Library of Congress,” says Whitcomb.

Anthony is a well-known citizen of New York State. She lived for many years in Rochester, where she campaigned for women’s rights. Anthony was also known to be arrested in Rochester in 1872 for an election. Suffragist history is deep in the area with the first national women’s rights convention in Seneca Falls, NY, about a half-hour drive from Whitcomb’s new law firm in Geneva.

Alongside Anthony, Whitcomb found a portrait of another suffragist and Anthony’s friend, Elizabeth Cady Stanton.

Many of the items in the attic were named James Ellery Hale, a photographer who had a thriving business from the late to early 20th century through about 1920, says Whitcomb. He later learned that his new building was once home to Hale’s studio. But the attic above the third floor is still a mystery. He says no one is sure how the supply ended up there, let alone why the attic entrance was plastered. 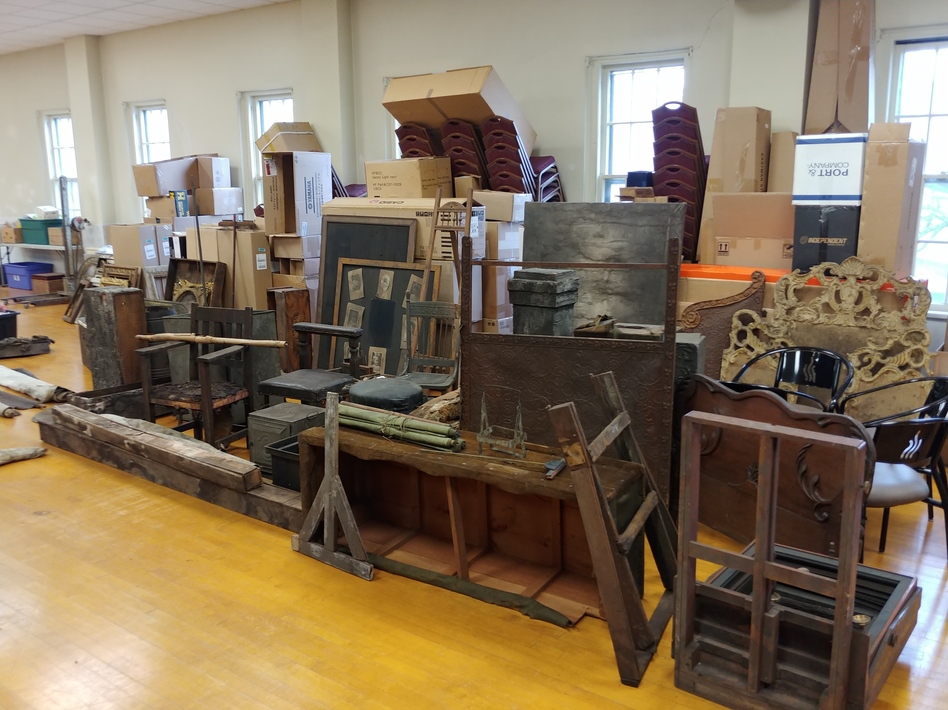 Some of the items David Whitcomb found in a hidden attic in a historic building were bought in New York State late last year. He enlisted the help of a local auction company to clean and catalog his finds. (David Whitcomb)

Whitcomb isn’t sure what will happen next to the collection. He enlisted the help of a local auction company to clean and catalog his finds. He hopes that if COVID restrictions allow, much of the collection will be on display somewhere by the summer.

“We were just blown away by the crowd,” he says. “The amount of stuff in that attic was insane. It was like going on an Easter egg hunt and opening each Easter egg while you go and find gold. “