“It was a very difficult time. Business assumed we just got into our busy season and then it worked, ”said Edge. “We were down 50 percent or more.

Jason Edge, who owns Junk King’s Vancouver franchise, said his business took a hit at the start of the pandemic. With so many staying home and cleaning up their homes, business has returned. Photo by Mike Schultz

Right. For Junk King, business has recovered. And while the pandemic certainly stole his business in the first few weeks, the pandemic was also a driver for the return of business.

“The big thing is that people work from home. We have a guest room, but this guest room has a bed and no office. Now you need a home office, ”said Edge. “We have a lot of people tidying up their things to make room because they live and work in their house all day.”

Edge said we are living in a “new era” and companies have had to adapt.

Even in the junk business.

“We are a full-service transport company. We do all the work for you. We’ll take everything away as long as it’s not dangerous, ”said Edge.

Prior to the pandemic, Edge notified customers that a crew would come into a house to do all the heavy lifting. Junk King continues to offer this service, but also gives a discount to any customer who wants to place the garbage outside the home for collection.

Edge, who opened a Junk King store in Tigard in 2016, said he had seen a lot in that service industry in four years. He saw a house being remodeled and changing the shape of its doors so that the homeowners couldn’t get anything out of the house. Junk King showed up, cut it open, and took it away.

Junk King, he said, am not afraid of a challenge.

The pandemic only brought more obstacles.

According to Edge, Junk King employees wore masks early on, long before they were needed. There were hand washing stations in every truck. The truck is cleaned after each order.

“Just do our part to slow the spread,” Edge said.

And work with customers. Some are more cautious than others.

“We maintain social distancing. We go in, completely masked, with gloves, take everything out of the house. We try to come into contact with each other as little as possible, ”said Edge. “We must treat everyone with respect.” 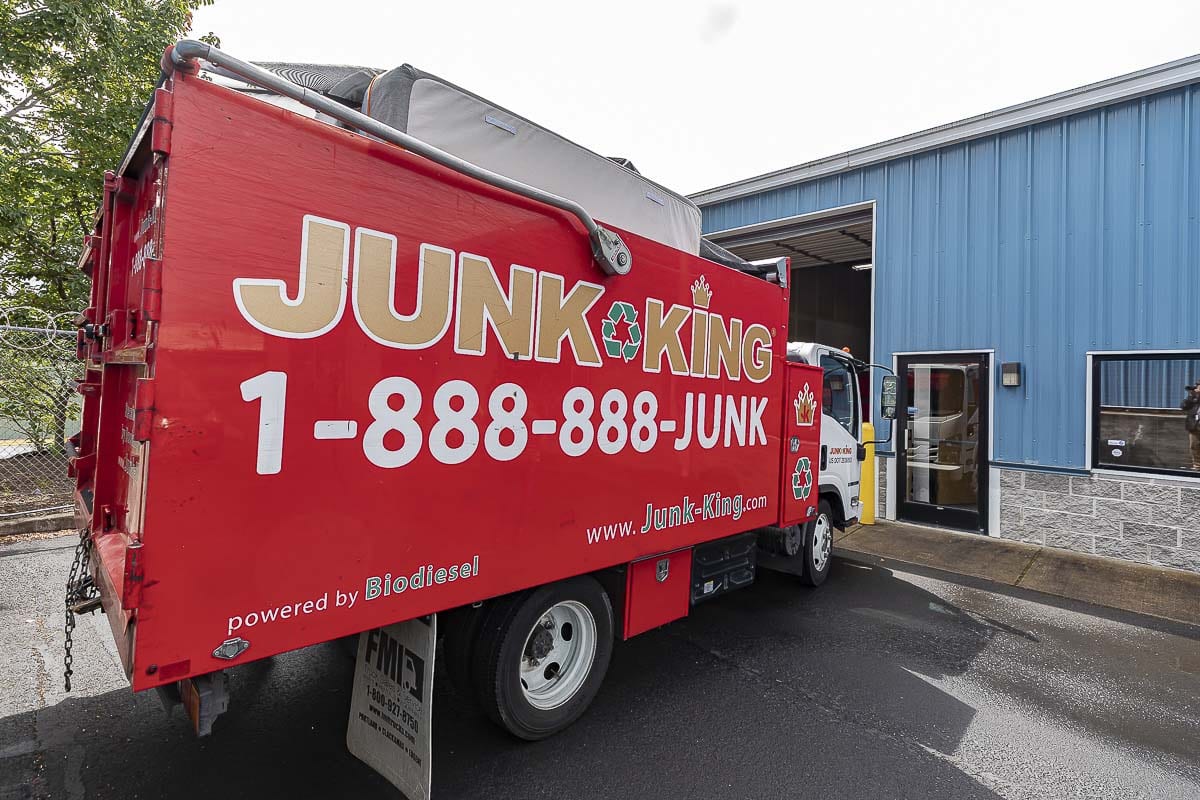 The Junk King has two franchises in the Vancouver-Portland area. The Vancouver office opened in February just before the pandemic. Photo by Mike Schultz

Edge said he dragged away perfectly good furniture as well as little-used exercise equipment. Then there are some jobs that can get messy. He’s been in several hoarder situations.

“We work a lot with people,” he said. “We’re joking, we’re sometimes half consultants, half scrap disposers.”

Most of the items Junk King carries are recyclable. Edge, 41, recycled long before it became hip.

“My mother is a science teacher. We’ve been recycling since I was a kid, “said Edge.

They lived in the Pennsylvania countryside. His family filled sacks with recyclable materials and once a month drove 15 miles to another city with a recycling facility.

Before opening Junk King for the PDX space, Edge traveled a lot in his career. He wanted a change. He wanted to see his family. So he took his appreciation for recycling and serving others and bought a Junk King franchise.

Five of his employees live in Vancouver so opening his next franchise in Clark County was an easy choice.

“I really like the vision and the recycling aspect of the industry,” said Edge. “We can make a small difference by doing things right.”

Looking for local appliance repair? Why you can’t always trust what you find on Google Maps